Members News : ‘This is England’ ceramic Charger to go on display at York Art Gallery 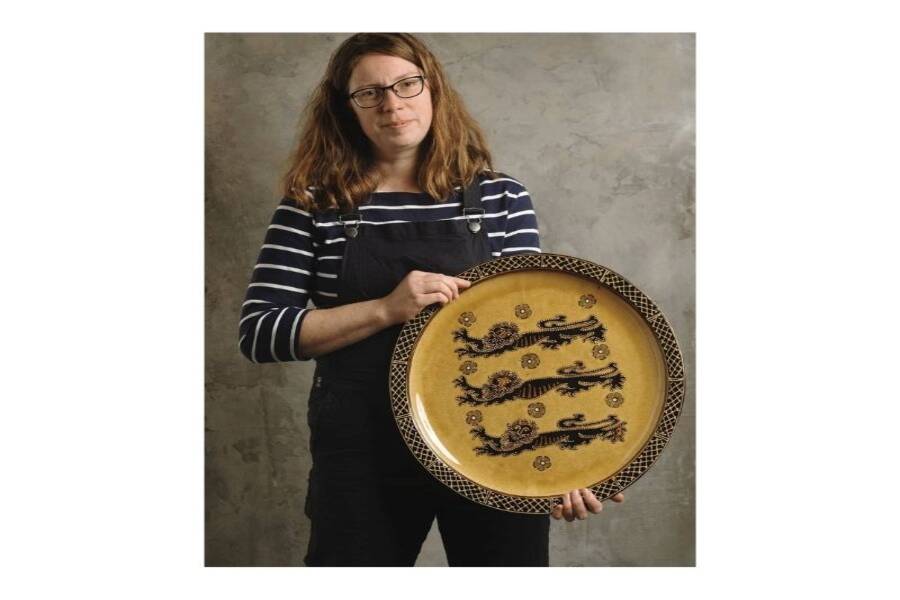 York Museums Trust is thrilled to announce the donation of the 'This is England' ceramic Charger to our collection. The slipware pottery will go on display in the Centre of Ceramic Art (CoCA) at York Gallery in April 2022.

'This is England' was made by potter Hannah McAndrew (pictured) in a personal response to the appalling events surrounding the Euro 2020 final, when three England players, Marcus Rashford, Jadon Sancho and Bukayo Saka, who missed their penalty kicks, were subjected to appalling racial abuse.

In September 2021, Hannah McAndrew offered the opportunity to win the charger in a prize draw, raising money for FareShare, a charity aimed at relieving food poverty and reducing food waste, of which footballer Marcus Rashford is an ambassador. In just 21 days £9000 was raised, equating to approximately 35,000 meals.

The Charger was won by Helen Hepburn, who has generously donated it to CoCA at York Art Gallery.

Potter Hannah McAndrew said; "I'm not a football fan, I'm happy to admit it. I now live in Scotland, but I was taken by the conduct of the English team in this Euro 2020 tournament. They have taken a very clear and united stand against racism both on and off the field. From what I can see, football teams have a huge influence with their supporters, so using their privileged position to send out this powerful message of tolerance and inclusion to fans of all ages can only be a good thing."

The charger is full of meaning and symbolism, featuring the three lions and ten roses from the England football team badge. The border is divided into thirteen sections representing the nationalities of the players in the England squad and the countries they could have chosen to play for instead of England.

The title of the piece, 'This is England' is borrowed from Stormzy's anthem with Dave and Ian Wright which was played during the Euro 2020 tournament and the lines; "the past can't hurt us. The future can inspire us. This is England, modern England".

Lindsay Boswell, CEO at Fareshare, said; "We are very grateful to Hannah and thrilled that she chose to support FareShare with the charity prize draw of the 'This is England' charger. Hannah's artistic fundraising efforts have provided the equivalent of more than 35,000 meals to frontline charities and support groups. The charger has played an important part to tackle food waste and get good food out where it's needed most. We are therefore very pleased to hear that it will be going on display with York Museums Trust where many others can be inspired by its positive impact."

It was important for Helen Hepburn, the winner of 'This is England' Charger, for the piece to be displayed publicly, so that the meaning stays fresh in people's minds.

Helen Hepburn, who lives near York, said; "I never, for a moment, thought I would win. It was just a wonderful cause and I loved finding out about Hannah McAndrew's work because I really like ceramics, especially slipware. I would never have thought my long-term interests in football and slipware would ever combine in any way at all!"

Visitors will be able to see "This is England" on display in the Centre of Ceramic Art in April 2022.

Dr Helen Walsh, CoCA's curator of ceramics, said; "We are thrilled to receive such a generous gift and to have the opportunity to add such an important and powerful ceramic work to our collection at York Art Gallery. Ceramics have long been used to share social messages and this charger is a contemporary example, highlighting the growing 'Black Lives Matter' movement. It is also a beautiful work of ceramic art, revealing the creativity and immense skill of the potter Hannah McAndrew."

Entry to CoCA at York Art Gallery is free. Book your tickets here.