Artful Migration // A long way ‘round to get here

Artful Migration artist-in-residence, John Wallace, writes about his five-year journey to connect with the elusive osprey 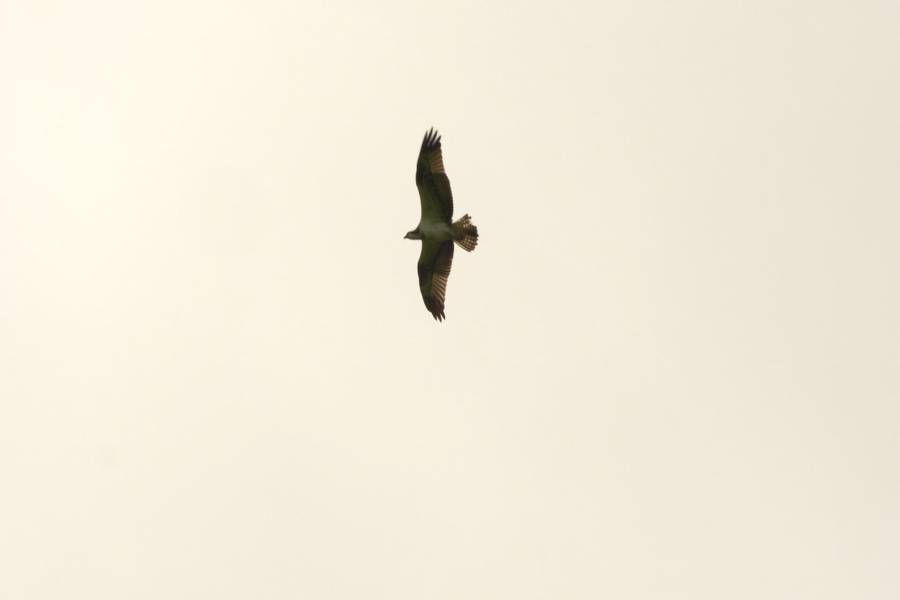 I’m walking. Walking and thinking about a new work. It’s a dreich day in the middle of summer 2015 and I’m poking about the high country near Elvanfoot, trying to figure out how to make a piece about the impacts of climate change in the common upland source area of three of Scotland’s major rivers – ‘Annan, Tweed and Clyde all rise up on ane hillside’ as the old saying goes. Two and a half years later, that piece, a collaboration with Professor Pete Smith, would become The Same Hillside - but that’s still in the future. Right now, I’ve wandered out across the top of the dam at Daer Reservoir and I’m puzzling at the sight of a fish spine, a trout, neatly and freshly parted from all flesh, but with no sign of the rest of the animal. It’s lying out on the very top of the dam wall. It’s not a small specimen - would have made a half-decent dinner for a couple of pescatarians. There’s nobody around, it’s hardly a day for a picnic (who takes raw trout on a picnic?), and almost nobody ventures up this dead-end road except for the few people who live this far up the dale, half a dozen Scottish Water workers, monthly visits by SEPA. Surely no otter or mink would have bothered hauling their dinner onto the very top of the sheer-sided parapet. A bird?

About a year later and I’ve caught up with Andy Izzard (now sadly deceased), the then Bailiff for the Upper Clyde Angling Protection Association, local resident and all-round wildlife-obsessed former squaddie. ‘Ah yes, that’ll be the osprey’, he tells me. ‘They’ve been visiting for a few years now, no nest yet. We’ve been keeping quiet about it.’

Cut to summer 2017 and I’m headed north on the M74 to meet up with the good folks of The Barn at Banchory to arrange a showing of The Same Hillside. In the intervening period, I’ve spent hundreds of hours hiking and filming in all seasons and all weathers around the tops of the Clyde, Annan and Tweed, and filmed around all five of the reservoirs in my study area – all well-stocked and prime hunting grounds for a hungry osprey. Truly, I’ve kept my eyes peeled but haven’t once caught sight of one. This despite Andy telling me on several occasions he’d seen one the day before, or this morning, or just now, minutes before I’d arrived to meet him.

If you’ve ever been on that road, just north of Beattock summit, you’ll know the place where the landscape suddenly opens up to reveal a flat, wild valley that runs away west from the motorway on one side, the Clyde meanders a silver snake below the road to Dalveen Pass. I’m in the middle lane, overtaking, right where the river runs alongside the carriageway for a few hundred yards, and as I glance left to check I’ve cleared the vehicle beside me, an osprey dips to scoop a fish from the water, the first and only time I’ve ever seen one. I shout out ‘Hey! Look at that! Did you see that?!’, looking around at the people in the vehicles beside me, then feel silly. They can’t hear me, everyone in their own steel and glass-encased worlds (an instant and a sensation that spawned another work, ROADSPACE). 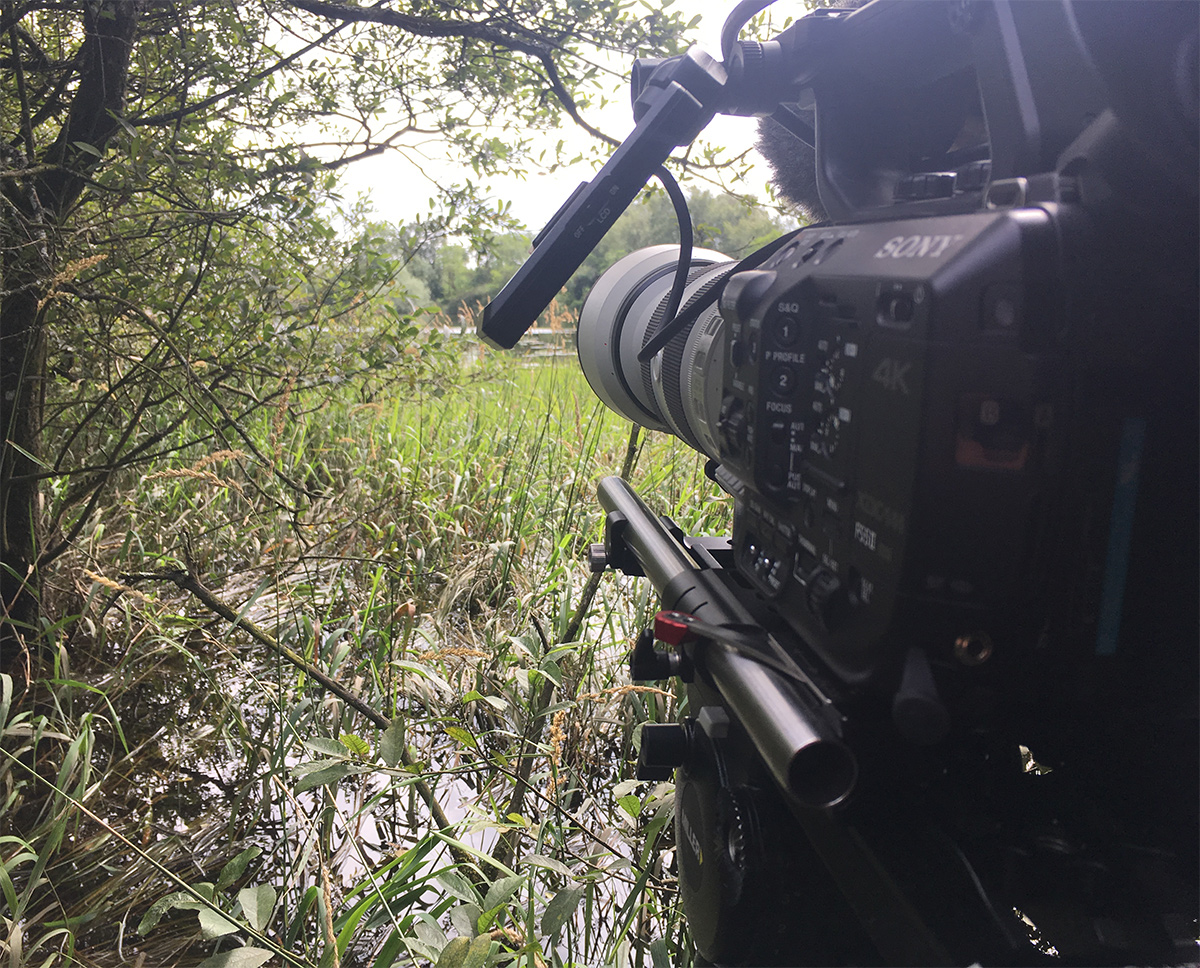 Cut to late July 2020. Finally on the right side of lockdown (longer than most in my corner of Annandale), I’m sweaty and insect bitten and scratched and up to my waist in floodwater, having lately tracked a pathless half-mile through fields, over ditches and fences, clambered down a steep banking and waded and manhandled myself and my gear through ten metres of flooded river margin tangled with willow and fallen oak boughs. I’ve been here ten minutes and my feet are already going numb from immobility and the pressure of the water against my waders, but I’m happy. Down the barrel of my lens, about 200m away, an osprey chick, one of two recently fledged from the new nest site at Threave, is teetering atop a dead tree stump with a sizeable trout skewered in the talons of its left foot. It’s making the best shape it can of dining between moments of overbalance and frantic flapping. Its first-to-fledge sibling, the stronger and more accomplished flyer of the two, is noshing away at its own fishy prize on an altogether better perch a few tens of metres downstream. A magpie arrives and starts hustling for scraps, hopping ever closer to a bird many times its size, but our chick is not so clumsy after all. Having turned first to examine its target, now only feet away, it turns around once more, then jets a yard-long stream of gleaming white faeces in the direction of the pied buccaneer. It misses, but the magpie takes the hint and leaves a few moments later.

I’d been filming earlier in the day from the other side of Threave island, in much more genteel and readily accessible surrounds of the National Trust for Scotland’s Kelton Mains reserve. As the osprey flies, it’s less than half a kilometre downstream, but a different world – one of flat shoes, graded paths, viewing platforms – seats even! - and a steady stream of visitors come to see the ospreys and all the other creatures that teem around the banks of the lower Dee. It’s a joyous thing to see so many people come to take in the views and the wildlife, many specifically to see the ospreys, and especially so after months of sticking to my own garden and local walks. I can’t remember when I last spoke to so many strangers in such a short space of time.

It has been a surprisingly long way round to get here: Five years since I first saw evidence of these magnificent hunters, three since my first sight of one. Then again from where I was earlier today, it’s a mile on foot, four by road, another half-mile down rutted tracks, then another on foot. But I’m happier this side of the river, and honestly never more so than when in or near a watercourse, free from human distractions and interruptions. It’s just me and the birds, and the slack, gentle sounds of the river in spate filtering through the reeds and grasses. It’s a moment to savour. These young birds will be gone soon on their long maiden flight to spend our colder months in Africa. But I’ll still be here, documenting the ecosystems that support them as they change through the autumn and winter, hoping again to see them when they return again next spring. Against that kind of journey, my travails with a few branches, a steep incline or two and a bit of murky water hardly seem to count.

Word and pictures by John Wallace