Women’s Work Songs, solidarity and memory: The media to record the hidden voice by Natsumi Sakamoto 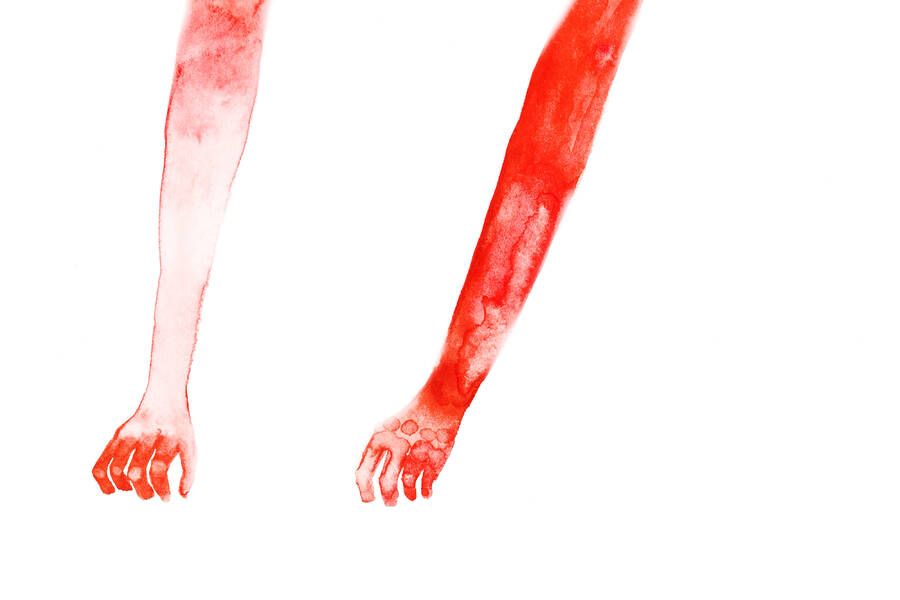 Glasgow-based artist Natsumi Sakamoto’s new animation ’Knitting the Intangible Voices’ (2021) features within the ‘infinite hands’ programme of short films. Natsumi made the film as part of a wider project looking at the Scottish Highland ‘waulking’ songs - sung by women during cloth making - as well as female workers of the Japanese textile industry. Below, Natsumi shares some of her research findings.

This is the first half of a longer essay, which is available in full via Natsumi’s website

Women’s Work Songs, solidarity and memory: The media to record the hidden voice

The point of departure of this project is the waulking song - Òrain Luaidh in Gaelic. Waulking is a process of tweed fabrication, the English term for which is ‘fulling’. During this process, the tartan cloth would be beaten by hand, to shrink and soften it. Waulking was a woman’s task. It was traditionally performed by between eight and twelve women, gathered around a wooden table in someone's home. In the Highlands and Islands of Scotland, where water mills were usually not available, waulking continued to be done by manual labour until around the mid twentieth century. (1)

Waulking songs were sung during this cloth making process in order to maintain a rhythm and lighten the hard work. These songs begin with a slow rhythm and become faster as the cloth dries and gets lighter, as it is passed clockwise, from hand to hand. Simple, beat-driven songs were sung about love, gossip, war and history, relationship with nature and landscape. Many waulking songs remain part of Scottish Gaelic culture, especially in the Outer Hebrides. One woman sings the verse and others join in the chorus. Songs are structured loosely to adapt the length to the labour, with some verses repeated and others improvised. These songs were all created by women.

I first heard waulking songs in 2019 when I was researching superstitions in Scottish Gaelic tradition. Waulking songs are well-known folk songs in Scotland, but I had never heard them before. I was fascinated by their unusual tune, which had a strong power to evoke feelings of nostalgia, even for someone like myself who does not share the history or roots of the place.

This waulking song, called Dhìrich Mi Suas A' Bheinn Ghruamach, is about a girl who tells of her sadness and her heartbreak as she climbs a gloomy mountain. Many beautiful waulking songs such as this were created and handed down orally by women themselves. They give a vivid picture of life in the Highlands and Islands in the sixteenth and seventeenth centuries from the point of view of women, and functioned as “the media for recording and celebrating all aspects of life ” (2). In Scottish Gaelic Songs, everyday tasks such as weaving, spinning and milking were accompanied by songs as “a metaphor for exile and desolation.” (3) It is very important in the politics of historiography to focus on the fact that the waulking songs were sung in women's voices and passed on by women themselves. This is because women's voices are not as well preserved as men's, especially in the case of 'ordinary’' women. As is well known, existing histories are written by authorities or elites, i.e. men, while the "weak" - the underprivileged, the common people, the poor - usually have no voice. Work songs, or oral history, is a method for constructing a "history from the perspective of the people involved". This would enables the creation of a multiplicity of voices in history. (4)

Sandra Schaal, a French researcher specialising in women workers in the Japanese textile industry, pointed out that most studies in this field lack the voices of the women workers themselves. The film Ah! Nomugi Toge, released in 1979, depicted the tragedy of women workers in textile factories and created a single social image of female factory workers as exploited and vulnerable. Similarly, the majority of existing analyses of factory women portray them as victims of capitalism or as socially vulnerable people with a tragic fate. However, through interviews with women who worked in Japanese silk mills before and after WW2, Schaal came across many positive stories about their experiences of working in the mills. For example, there are testimonies of rural girls who were originally poor but were given better food in the factory than they had at home, as well as the joy of independence in earning money on their own. An important part of this research was the work songs sung by the mill women. Despite the fact that labour songs are "non-verbal communication", or "meta-language", and that they are an important tool for understanding the work and life world and culture of these women, Schaal points out that few existing studies have given importance to the work songs as historical testimony. In order to reconstruct history from a variety of perspectives, it is important to re-evaluate the importance of songs. They do not necessarily reflect historical facts, and It should be borne in mind that there are aspects of fiction, but nevertheless, the work song can be a device to preserve and revive -  as "sung memories” - the voices of people who have been forgotten in history. (5)

The waulking song, a work song, is exactly the kind of ”sung memory” mentioned above. When you listen to the song, even if you don't understand the language, you can see the landscape the singer was in, and the melody stays in your mind. Refrains are composed entirely of meaningless vocables, like “hi li ho leo… “ which has a mnemonic significance. This functions to help the women to sing correctly. (6) This repeated, non-verbal phrase resonates with us across generations and countries, and will remain in our memories. One of the characteristics of its mysterious appeal is the repetitive rhythm. The women sit around the table, their hands “reach to the right and cultch the cloth, draw in, pass to the left, push out and free the hands to grasp again to the right. “ (7)  The repetitive rhythms of the song help to keep people working together, and they are repeated continuously until the work is completed. To finish a waulking, it usually takes around eight songs, with each one lasting up to twenty minutes, and the number of songs used as a measurement of workload. The rhythm is constantly repeated. This was a hard, non stop process so normally people took turns, coming and going to join the songs.

Historically, this repetitiveness was often regarded as a typical characteristic of women's work. However, anthropologist Judith Brown points out that this is not an innate feature of women, but an economic condition.

“Repetitive, interruptible, non-dangerous tasks that do not require extensive excursions are more appropriate for women when the exigencies of child care are taken into account.” (8)

If the beginnings of the gender division of labour in the human species can be attributed to care work, such as child rearing, then it can be argued that this structure remains unchanged in most societies today. This repetitive nature can be associated with 'female labour' in general, such as washing, cooking, cleaning, sewing, child care and other forms of care. These reproductive labours that sustain our lives are maintenance labours, which we cannot live without. However, they often remain invisible in society. One of the reasons for this is the unproductive nature of labour. Arendt made a distinction between 'work', which creates durable artefacts, and 'labour', which leaves nothing behind. She mentioned; "It is indeed the mark of all laboring that it leaves nothing behind, that the result of its effort is almost as quickly consumed as the effort is spent. (9)

Since labour is unproductive, these labours are always hidden, especially within patriarchal and capitalist structures, even though they are essential for the maintenance of life. This rhythm of labour in the domestic sphere is similarly repetitive in nature: it is repeated without a single day's rest. The rhythm of this repetitive gesture is the sound of the accumulation of the countless tasks of women, and the frequency of the rhythm can still resonate within our bodies today, like the ebb and flow of an invisible tide. When we surround ourselves with these rhythms of labour, we may dream of having a kind of collective body that goes beyond the individual body - which allows us to share our experiences with these countless women in history.

As the forms of labour have changed over time, so have the work songs. In the Scottish wool industry, waulking has rarely been done by hand since the 1950s, when most of the work started to be done by machine. Even as industrialisation made it difficult to sing while working amidst the noise of the machines, the women did not stop singing. Ted Gioia, an American musician and writer, points out that although industrialisation swept away all vestiges of the culture of craftsmanship and hand labour, the textile industry would become best known as a breeding ground for songs of protest and complaint.(10) Work songs were sung at break times to share the hardships of work, and they were sung at protests and continued to be the 'voice' of the workers. The waulking labour is lost, but the songs are still loved and passed on as an oral tradition.

Tobar An Dualchais - The Sound of Scotland’s Traditions: https://www.tobarandualchais.co.uk/

Natsumi Sakamoto is an artist living and working in Glasgow. She graduated from MA Fine Art at Chelsea College of Art and Design in 2014. Her practice is based on multiple media including video installation, animation and paintings.

“I am interested in the relationship between memory and narrative. Individual's history consists of personal narratives such as stories about family, friends, and everyday happenings. Some would say those narratives are just ordinary and small, sometimes boring to others. However, I would like to create a connection between those personal histories which would not be told by anybody and found narratives as in mythology and folklore.”