This year’s modern makers programme follows woodworker Mark Zygadlo and his team as they work together to build a treehouse. 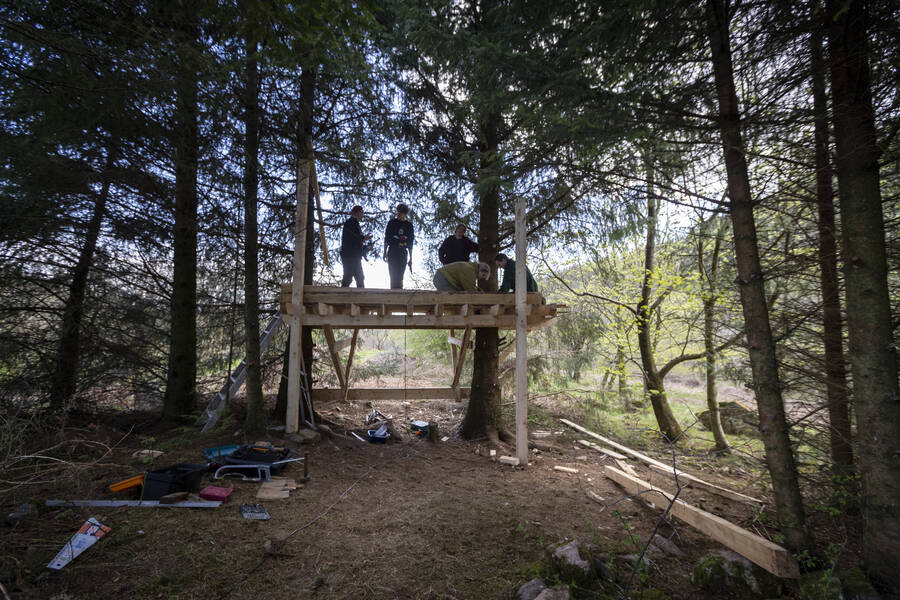 It rained all day at Taliesin, so we got a pretty damp introduction to our first day on site which turned out to be a test of everyone’s resilience and patience. It is a long walk uphill, carrying all the gear and the wood to the site. The biggest and heaviest single thing was a rather swanky generator lent to the project. As most of the parts are already made and fitted, we did not have much to do on site with power tools. However, drilling the holes for the treehouse fixings did not require power so we struggled up the hill with it, only to find after the first half hour, the first hole, that we had a very swanky lump of unreliability on top of the hill. We had to have someone poised with a drill ready to make the most of the few seconds the generator would run before dying. Quite testing.

But, despite the setbacks, the team remained upbeat, and we managed to get the first stage of the framework securely in place by the end of a long day. We were a little preoccupied so not much photography was done. 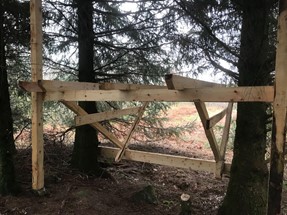 The lower beam fixed between the trees supports the braces which are holding up the platform. A similar and parallel beam is also fixed to the trees above the lower one and is the middle one of the three beams. This will support the floor joists, some of which can be seen already in place. Two upright corner posts will keep the structure steady until the upper fixings are in place when we may be able to remove them.

On Saturday, we will get the joists all fixed and put the floor onto the platform. Before that, I will get a smaller, lighter, and more reliable generator.

I’m full of admiration for the Modern Makers team; the generator drove us to distraction, we were wet, dirty, and exhausted by the time we got everything finished but they still want more!!! Bravo the team.